From thousands of years, people from all the societies are having a deep attraction for Mantras, Yantras, & Tantras and science behind them. People have been using these sciences for well-being & good health. There is a large number of people who believe that by appropriately using the above sciences, one can achieve his goal, success, prosperity and can fulfil all his wishes.

Apart from good wealth and good health, this science is also very useful to achieve one’s spiritual goals, enlightenment, peace and tuning with the supreme power.

There are thousands of benefits of these sciences, even though due to a lot of confusion and misunderstandings about these highly precious sciences and there are people on T.V., newspapers, magazines etc, kept adding more in it,  that is why the majority of the educated people, top-class officers, executives, young generation and students have kept themselves aloof or uninterested from these most useful immortal ancient sacred sciences.

Mantra has loads of benefits. A large number of modern scientists are working on Mantras and Tantras. They have found and noted the astonishing results from the chanting of the particular Mantras. They have concluded that the Mantras are the sacred sounds or vocalized power sounds which create certain frequencies.  The law of attraction says, ‘Like attracts Like.’ By repeated exposure of the particular mantra, it creates a particular frequency, which can attract the ‘Like’, the desired results from the Universe.

Why Only Srimant Zarekar sir can give you knowledge of Mantras, Tantras and Yantras

He is a Psychologist. He is a hypnotherapist. He is also an NLP practitioner. He is a counsellor. He is a horoscope reader in traditional as well as Krishnamurti Padhdati. He is deeply passionate about understanding and harnessing the potential of fellow human beings. He is a spiritual guide. He has passed his B.A. exam. With Psychology. He has well over 37 years of robust experience in practising various mantras, tantras and yantras. He is guiding and helping the people to overcome their problems by using the mantra power. He honestly feels that in today’s situation, the human being can survive only through the creating right frequencies of the mantras. He is blessed by and always in close touch with great (but unknown) yogis, gurus, saints in nowadays. He has received the Diksha by various gurus, like Vamnarao Gulwani Maharaj, Sri Nikhileshwaranand Maharaj, Kriya yoga, Kundalini Jagruti, Dhyan Yoga, Mantra Yoga etc.

·         Understanding the format and structure of  Mantras,

·         ‘Sri Laxmi Nyas’, the powerful technique of internalizing the mantra.

·         A powerful session to create an awareness of the relation between Mantra Shakti, & power of the Universe. 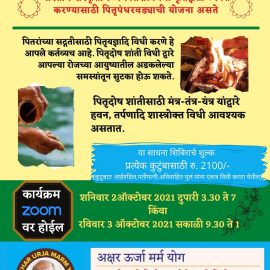 “Change your life with Mantra. Get all happiness, wealth you deserve. Whichever problem you’re having in your life, the mantra can resolve it. Let’s give a chance to prove it.”